After three years serving as an elected politician, I made Speech to reflect the strange role that language plays in the public arena. The on-screen character silently mouths a campaign speech, while an original sound track addresses the tension between being and appearance.The sound is played on headphones. The image is projected onto a raised circular screen, six feet is diameter. 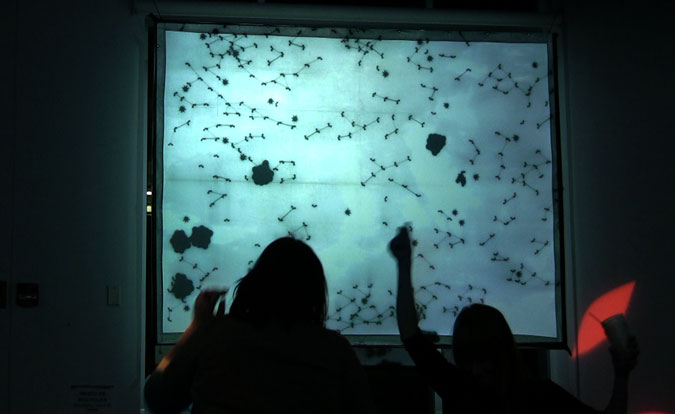 Tentacles is a collaboration between Geoffrey Shea, Rob King and Michael Longford. We set out to create an ambient play environment in this public space. It was intended to be always on – something to be discovered within the city. Without a beginning or an end, participants could join in or leave casually.

From within the crowd, viewers can step onto the stage of the projected environment – to display themselves in action, engaged with other virtual creatures. Movements and gestures become part of this spontaneous public performance. Like on a dance floor, where rules about decorum, engagement with strangers and physical contact are suspended. 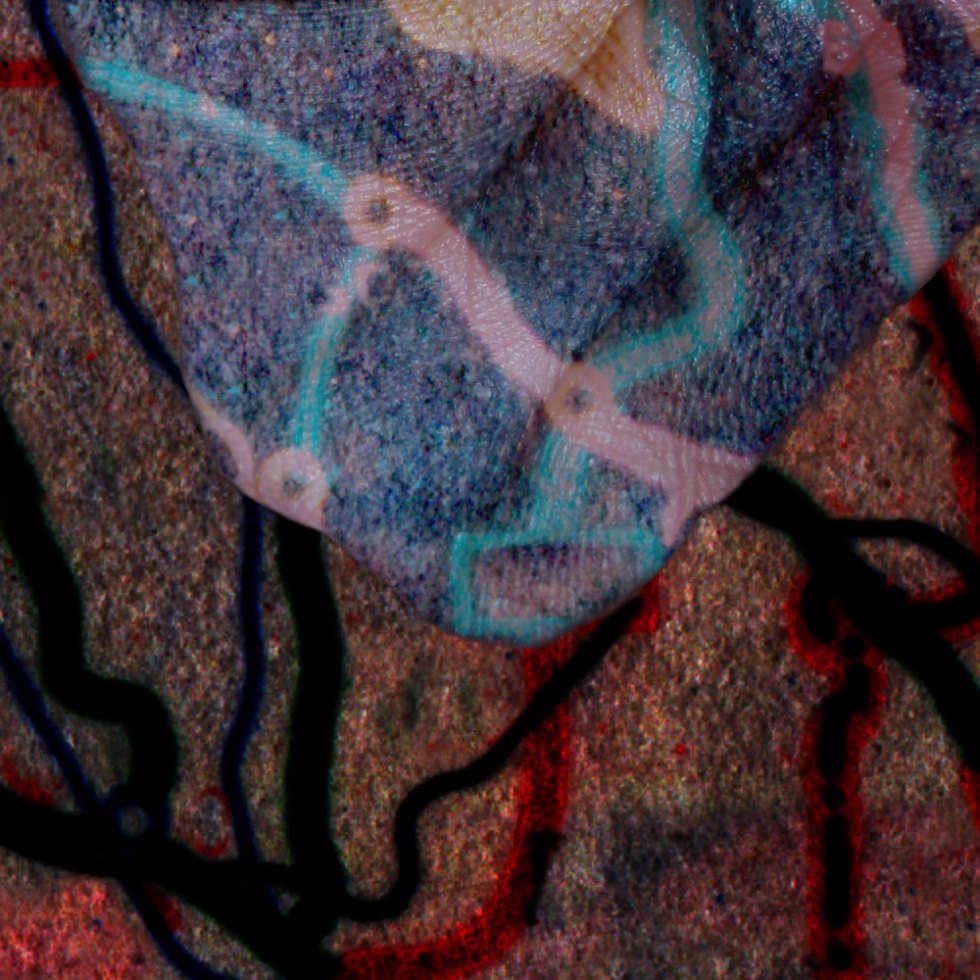 Sin or transgression is examined as a technology for shaping human action. On a certain level it is a useful tool for smoothing social interaction and guiding us towards improvement, but typically it requires a huge element of faith—faith that questions we cannot answer can be dealt with by other means, that ambiguous guideposts can point us towards a destination far over the horizon.

Man + Sin is a triptych of images that are much larger than the screen on which they are displayed. Users navigate the images, exploring beyond their edges and discovering sounds and motifs that parallel the act of structured discovery in life.

Presented as part of CODE Live 1 and located in one of the creative exhibition spaces at the Centre for Digital Media, Great Northern Way Campus, PLAY: The Hertzian Collective is a musical sound sculpture created with projected video images and controlled collectively by viewers with their mobile phones. Viewers receive instructions on how to play by dialling a toll free phone number, and by pressing buttons on their keypads, which enable them to take control of different parts of the action.

In a phrase coined by the artist, The Hertzian Collective refers to the intersections that are possible when the musical tones and radio frequencies (both measured in hertz) that underpin this artwork are controlled or played by the ad hoc collective of individuals who happen to be standing in front of it at a given moment, cell phones in hand.

Inviting and participatory, the work encourages viewers to play with it. Visual and sound rhythms and sequences are created by the players and exploration quickly gives way to jamming and collaboration as each person realizes that they are sharing the creation of this interactive artwork with other viewers standing nearby. Structured like a primitive musical instrument or an elaborate clockwork toy. 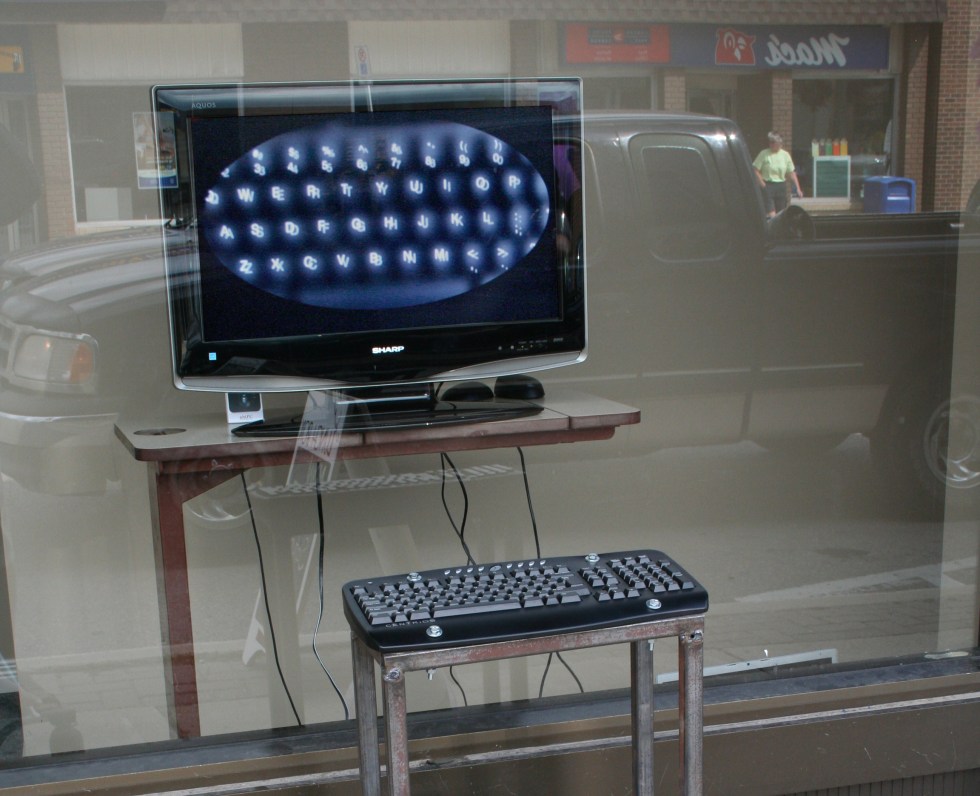 “Thursday is the middle of the week”

“You’re not the one I was talking about”

“Interest is hard to feign”

“Other people have good ideas” 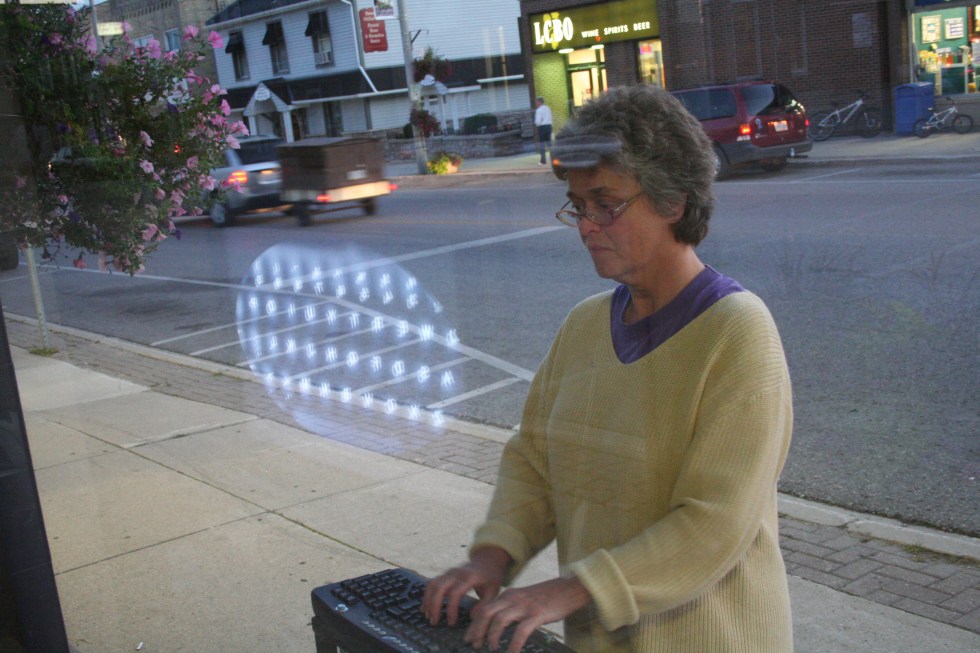 A tiny character struggles to relay a poetic text from a wall mounted video display. Speaking of hope and despair, she is overwhelmed by the static emanating from a nearby, rotating radar antenna. It scrambles her signal and garbles her train of thought. 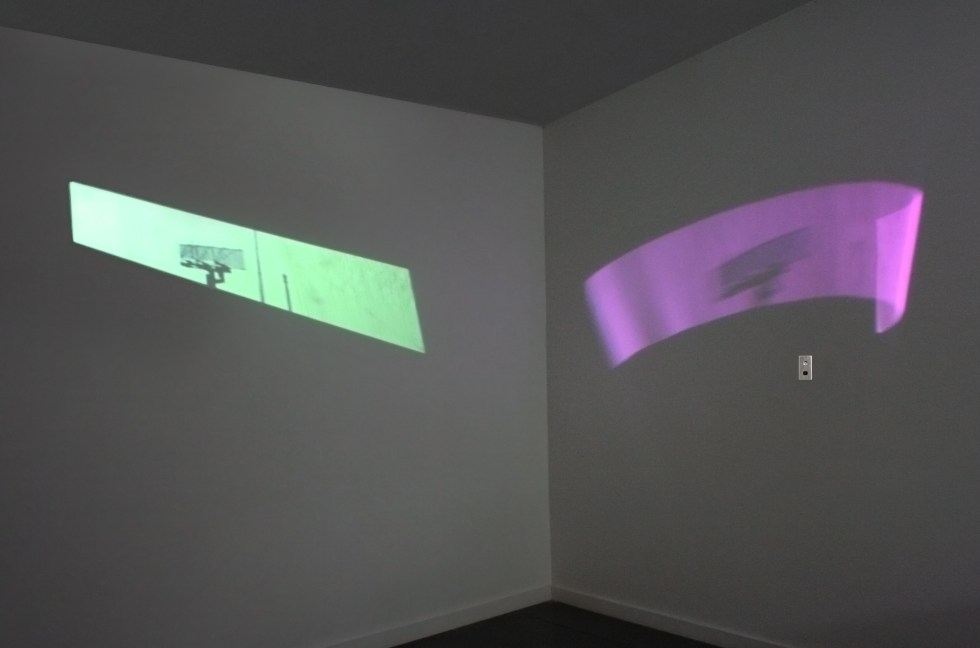 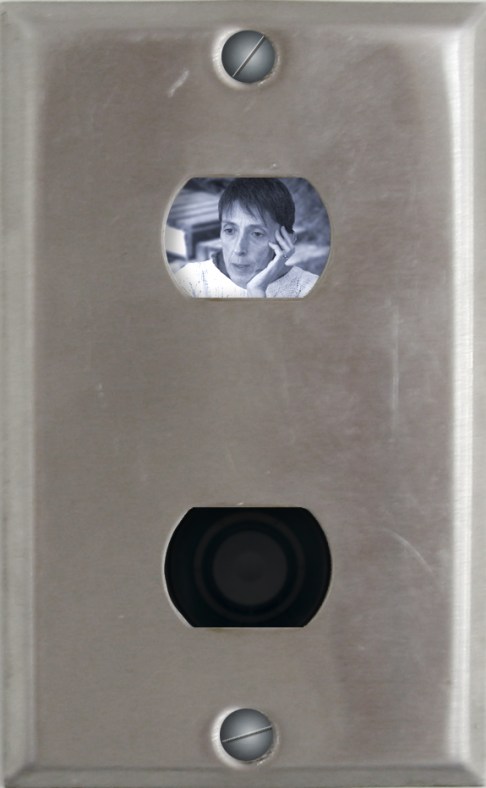 ‘He spread his sharp brittle soul thinly, in every direction till he blended into the world…’

‘He said: I’m working for pay and for pride and for you in fields we’ll harvest tomorrow…’

‘The phone rings twenty-five times, grating on her nerves. At the other end, the caller sinks in desperation….’

Viewers simply dial a toll free number and are then prompted to enter key presses. The patterns they enter correspond to arpeggios and loop several times. Their phone connects to a VOIP service which delivers their key presses to an Asterisk server which relays them to the control machine wired up to the xylophones custom controller board. This version was presented at MobileFest in Sao Paolo, Brazil. See more at www.mobilelab.ca. 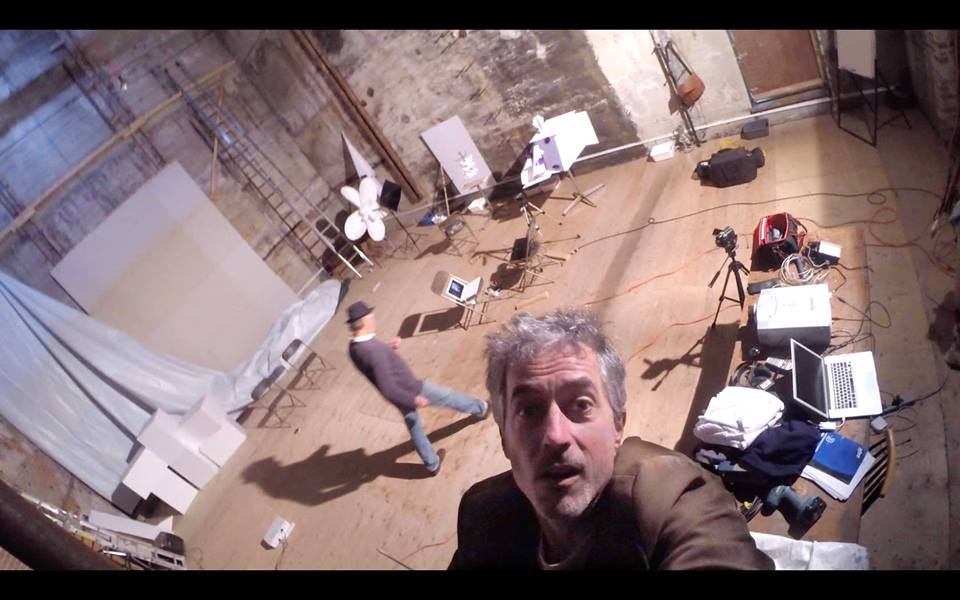 Helping kick off the ongoing artists’ Vines competition at Akimbo with a peak into Layne Hinton’s studio.

Just finished editing the profile of Tom Leonhardt at the Common Pulse Festival.

I’ve been developing the code for an xbee mesh network to support this large, outdoor audio installation. The tricky bits were getting Arduino Waveshields to accept remote commands, and getting users’ GPS data into the system. So I thought I’d share what I learned on Git-Hub to make it easier for the next artist trying this:

Rob King and I created a new piece for the Spanish Centre in Toronto for the 2013 Nuit Blanche.

Viewers contributed Vine videos that were transformed into stained glass windows, an illustration of the church of social media.

Just finished editing Kazumi’s performance at the Common Pulse Festival, where he was an artist-in-residence.

The Festival is starting; artists-in-residence are arriving!